The second promotional event for the National Qualifications Framework was held on February 15, 2019, in the premises of the EU delegation, where the target group included representatives from the Ministry of Education and Science, the State Education Inspectorate, the Sectoral Qualifications Committees, and the secondary vocational schools in Tetovo and Kumanovo. 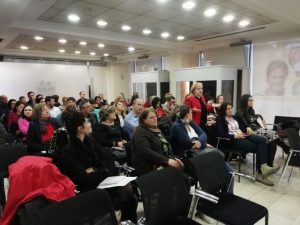 The standard of qualification and the significance of the ECTS credits was the topic of the presentation by Mr. Cedomir Dimovski, adviser from the Center for Vocational Education and Training. He explained the need for a standard as a basis for preparing an educational program and explained the elements of the Qualification Standard.

Ms. Valentina Gocevska, advisor from the Bureau for Development of Education, started her presentation with the the principle defined in the European Pillar of Social Rights that “Everyone has the right to quality and inclusive education, training and lifelong learning in order to acquire skills with whose help they could fully participate in the society and successfully move on to the labor market “, and specifically emphasized the role of learning outcomes that are one of the elements of the National Qualifications Framework. She underlined that writing the learning outcomes required great attention and seriousness and presented the 10 tips for writing learning outcomes in the Qualification Standard and Curriculum. 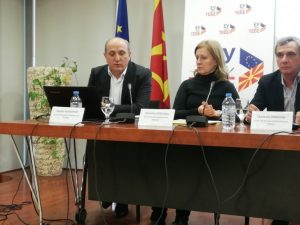 Ms. Natasha Janevska, State Counselor at the Ministry of Education and Science, emphasized that the establishment of the National Qualifications Framework and the connection with the European Qualifications Framework have led to changes in the laws in the field of education: the Law on Primary, Secondary and Higher Education , The Law on Vocational Education and Training, regarding the introduction of new terms and the preparation of educational / study programs and the transparency at the horizontal and vertical level in the framework; Law on Adult Education, introduction of the process of validation of informal and informal learning; The Law on the Development of Education, especially in the part of pedagogical documentation and the introduction of the diploma / certificate supplement, and the Law for the State Examination Center in the area of ​​national testing. 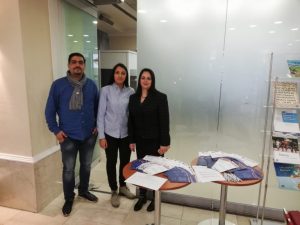