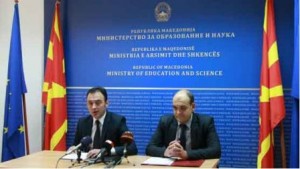 “Members of the EQF Advisory Group established by the European Commission stated that the report was clear, concise, relevant to its purpose and it was unanimously accepted. I am particularly pleased that this process is completed in a shorter period than expected, when compared to some more developed European countries whose reports have still not been accepted, although they have submitted them before us,” said Ristovski.

The Report for referencing the Macedonian Qualifications Framework to the European Qualifications Framework, was prepared by a smaller working group which also prepared self-certification of the National Framework for Higher Education Qualifications, which is the responsibility of the European Area of Higher Education. The working group was comprised of: Ms. Aspasija Hadzisce, Ms. Natasha Janevska, Ms. Nada Stoimenova and Ms. Borcho Aleksov, representatives from the Ministry of Education and Science. During its preparation, the Report was communicated to stakeholders who were involved in the development and implementation of MQF through presentations, workshops, meetings and debates. All of their opinions and suggestions were included in the Report.

“This helps ease the recognition of domestic qualifications abroad and vice versa, and it will further enhance the mobility of the labor market, but also of students, pupils and their teachers. The set up of the Qualifications Framework will enable for it to be a tool for tunning qualifications according to social needs, the needs of the labor market, the needs for personal development in the context of lifelong learning for each individual, and for assessing their achievements in a systemic, structured and sustainable manner,” said Ristovski.

The Director of the National Agency for European Education Programmes and Mobility, Mr. Dimitrov, added that the Macedonian Qualifications Framework will be a transparent system that provides the basis for the acquisition of qualifications, progression and quality of qualifications.

“One of the roles of the MQF that is particularly important is its impact on increasing the quality and quantity of international mobility during learning processes, as well of mobility for trainings as part of the labour market. The success of aligning the Macedonian Qualifications Framework to the European Qualifications Framework is of great importance for Macedonia, and, in effect, signifies that the Macedonian education system has joined the European education area,” stated Dimitrov.